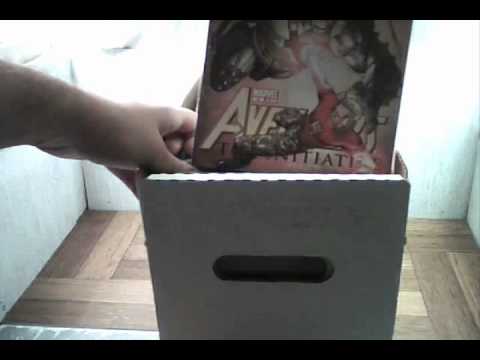 “Subscription Service”, “Pull Box”, “Your File”…etc…etc.  There are a dozen names for how a comic book store will hold your comics.  Oh yeah, “Hold Box” is another term that’s frequently used.  Some stores don’t even have this service.  It’s hard to believe there are places where you can call and say, “Hey!  I’ll be by in 3 hours to pick up Batman 13.  Can you hold it for me?”

And the owner will say,

“No way man.  We don’t hold books period.  Good luck getting here in time while there are still issues on the shelf…suckaaaaaa!!!”  Well…maybe not in such a snarky tone but there are stores whose business model decrees that they never hold books.  After all, if you don’t hold a book then you can’t be stuck with a book.

So what do I mean by “stuck with a book”?  Here’s the nuts and bolts comic retail back story on how comic sales work.  Proceed with caution:

When a comic book comes out and hits the shelves it basically has a “shelf” life.  The shelf life can be determined by how long it takes for the book to stop selling and start just sitting there gathering dust, forlornly staring up at you pleading for someone to buy it.  For example, when a brand new comic comes out I can usually sell about 80% of it the first week, 10% of it the second week, 5% the third week, and 2% the fourth week.  After a month the book just gets dumped in the back issue bins or blown out to a flea market dealer.  These numbers vary of course…some books can sell for months and others are pretty much done after the first week.

So what happens when a file customer secretly decides to just stop getting his books?  A month will go by…maybe two…and after calling and e-mailing we finally blow out his file.  But what do we have?  A file full of books that are beyond the 4 week selling margin.  A bunch of “dead books” that I’m now stuck with.  Wasted useless inventory that I’ve got money invested in.

Now it’s not all as bleak as this.  I don’t have giant bug infested bins of ancient stock sitting in my basement.  Some of the dead books will be recoverable in the back issue bins.  People still, on occasion, buy older issues to fill holes and such.  But in general I end up with a sizable amount of dead product which costs the store money.  And for this reason there are stores that refuse to hold your books.  Some stores require you to put down your credit card info so that they can later charge you for not getting your books.  Some stores just eat it and write it off as a cost of doing business.  I’m honestly not sure which is the best method but I do know one thing:


Be courteous to your store and let them know if you don’t want to continue collecting your books.  Trust me, I won’t be butt-hurt if you cancel your subscriptions.  Quite the contrary, I’ll be overjoyed with getting this information because it will allow me to more accurately order comics in the future.  A lot of folk just want to be non-confrontational and let their file go to seed…but behavior like that can be incredibly harmful to your friendly local comic book store and no one wants to be mean to their comic store, right?