So it was late 2010/early 2011 that I began to notice that the quality of comics coming from Image was just getting amazing.  Let me qualify this statement with the general notion that from 2003 until 2009 there just weren’t any good comics coming out of Image except for Walking Dead and Invincible.  Sure… there were the occasional gems such as Elephantmen but in general I think I was ordering maybe 2-3 of some Image titles and a big fat zero for a big chunk of their books.  Then we got Chew…and then Morning Glories…and then it just started to roll.

A lot of good books came out from Image in 2011.  A few that come to mind are Luther Strode and Severed (Scott Snyder is amazing…that’s right…AMAZING.  Not “amazing” like a dog playing the piano but “AMAZING” like someone flying to Venus in a space ship made of Twizzlers).  But now I’m going to give you the big reveal.  A wonderful comic that only myself and a couple of other people enjoyed.  Of course the people who also enjoyed it were Warren Ellis and Mark Waid, but what do they know about good writing? 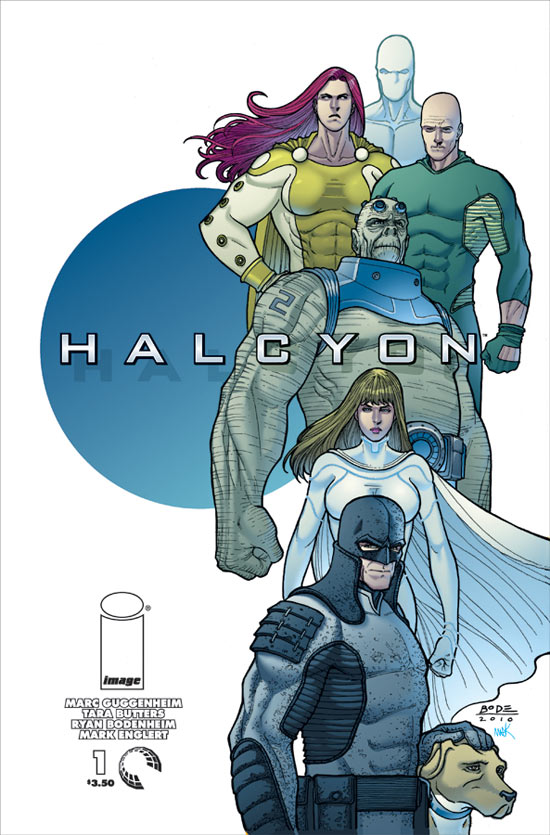 Halcyon is a wonderful five issue story written by Marc Guggenheim and Tara Butters and drawn by Ryan Bodenheim.  Imagine a world full  of the classic super hero/villain archetypes where good wins.  Crime goes away.  Wars stop.  The bad guys give up and devote themselves to such trivial endeavors as curing cancer and global humanitarian aid.  A flawless utopia…but an enforced utopia.  It’s not that people have just stopped being bad, instead society is under a mental compulsion where they can’t do bad.  Sabre (aka Batman) throws himself into solving the mystery of  how and why this is happening while coming at odds with his teammates in Halcyon (aka the Justice League) who are trying to decide if an enforced utopia is better than no utopia.

So there it is.  Superb dialogue, a great mystery, Enos the cybernetically enhanced genius space chimp (not joking on this one), and a ton of super heroes beating the crap out of each other.

So who is this Guggenheim fellow?  Who’s Tara Butters?   I have no idea.  I’d love to be able to say, “these folk are awesome.  Here are the other 50 things they’ve done that are all equally awesome.”  Nope, I just can’t do it.  Outside of a stint on The Flash and some odds and ends Guggenheim really hasn’t done much in the comic industry.   I’m not even sure if Tara Butters (the comic writer) is really a person.  What I am sure of is that they work magic together and I’ll follow their writing careers from here on out.